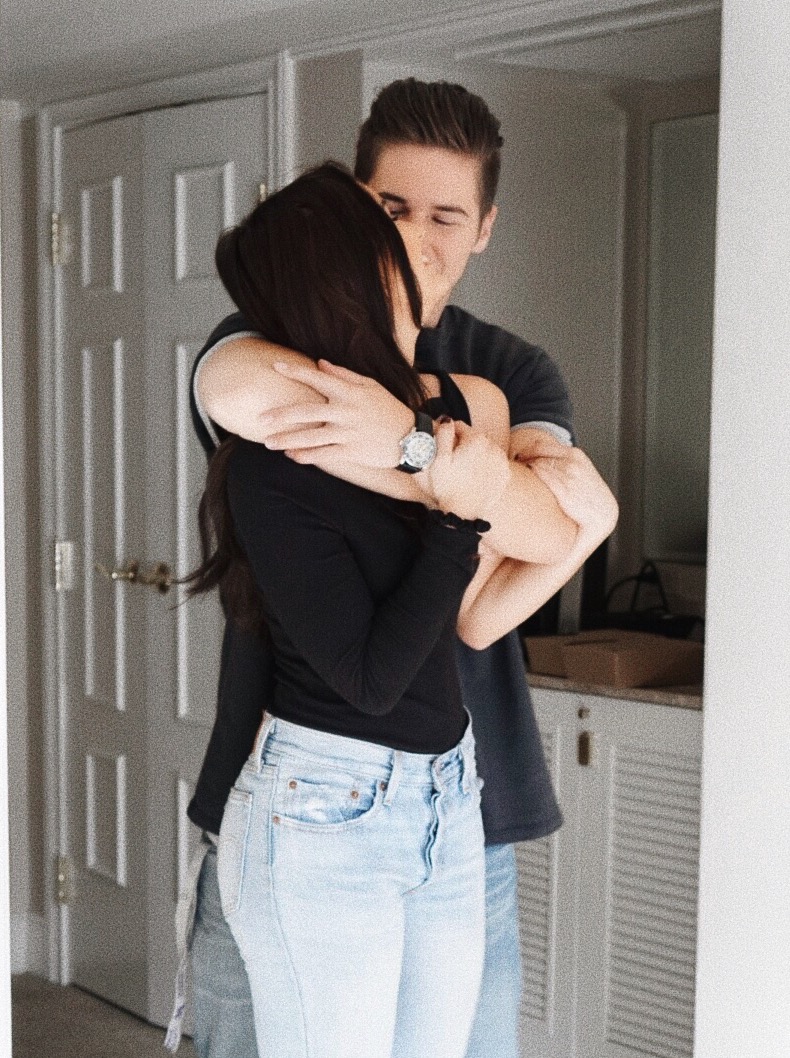 As you probably noticed through my posts this past weekend, Keegan and I celebrated our “dating birthday”, as he likes to call it 😉 We had the best little staycation weekend spending quality time with one another. These past four years have flown by and when I think back to who we were when we first started dating it always makes me laugh a little. To say we have grown as individuals and as a couple would be an understatement, and the exciting part is that these first four years are only the beginning.

Since I have gotten so many requests to share more details about us, I thought I would include a few fun things about Keegan and I so you can get to know us a little better!

Now for our staycation weekend celebrating each other. I wanted to do something special because we don’t do things just the two of us that often. We are people who love to surround ourselves with our good friends and often our “us” time is spent with others, which we do love. We are so lucky to have such great friends and family that we love dearly, but every so often it is nice to have just Keegan and Morgan time, as we like to call it. When planning things out, everything just happened to fall into place which usually never happens. I had this great plan in my head but I wasn’t sure it would actually work out, but it did and I was beyond happy! I thought it would be fun to share our week in itinerary form, and maybe some of you (ahem..some of the husbands and boyfriends out there) could take a few ideas, put your own unique touches on it, and use them for your anniversaries as well, after all this is a girl created and girl approved anniversary itinerary 😉

Happy hour at The Nest and Sushi Kashiba for dinner 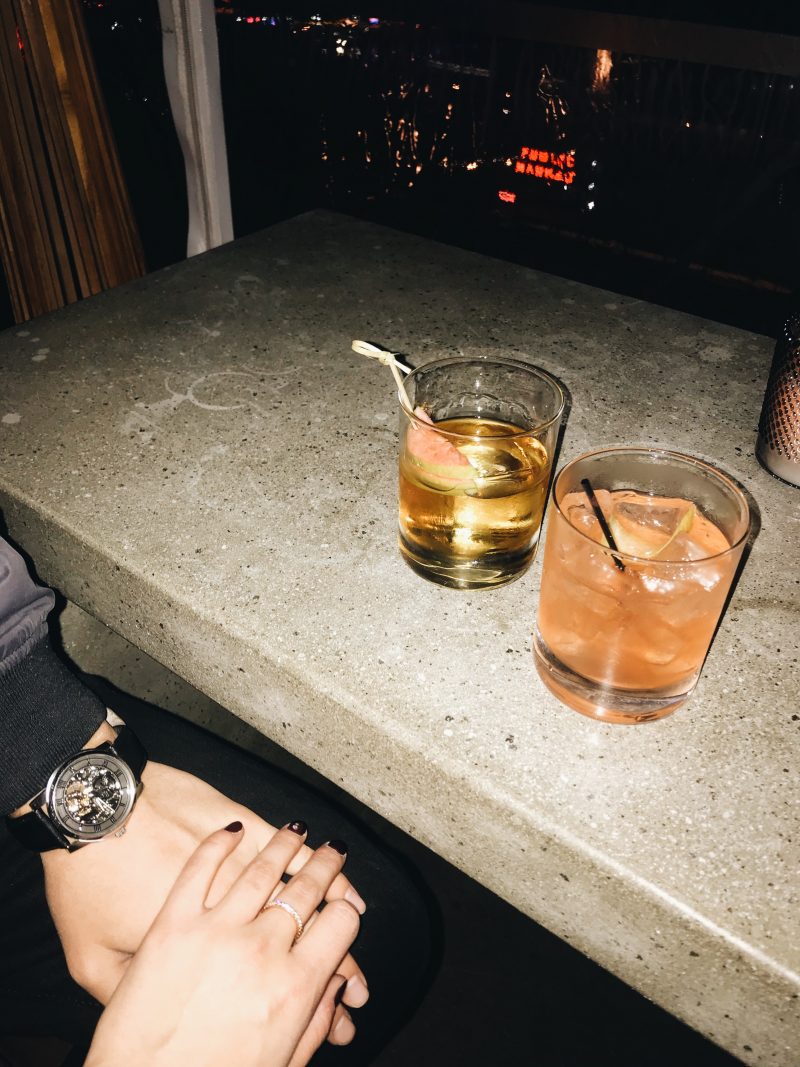 On our actual anniversary, November 8th we decided to make reservations for Sushi Kashiba which is known to be one of the best sushi restaurants in Seattle where Shiro Kashiba himself makes the sushi. Being the sushi lovers we are, we knew this was the place for us, plus we had never been before so that was an extra incentive to go. I will say, it was hands down the best sushi I have ever had. We each did the “Peak” dinner set and there wasn’t a single piece we felt was less than exceptional. The Uni was particularly amazing. Such a memorable meal. Beforehand we wanted to grab drinks somewhere and with The Nest being so close we popped up there for spectacular views of the city with and a cozy yet trendy setting for drinks. If you haven’t been up to The Nest at the Thompson Hotel put it on your list for places to go, you will love the atmosphere, views, and handcrafted beverages. 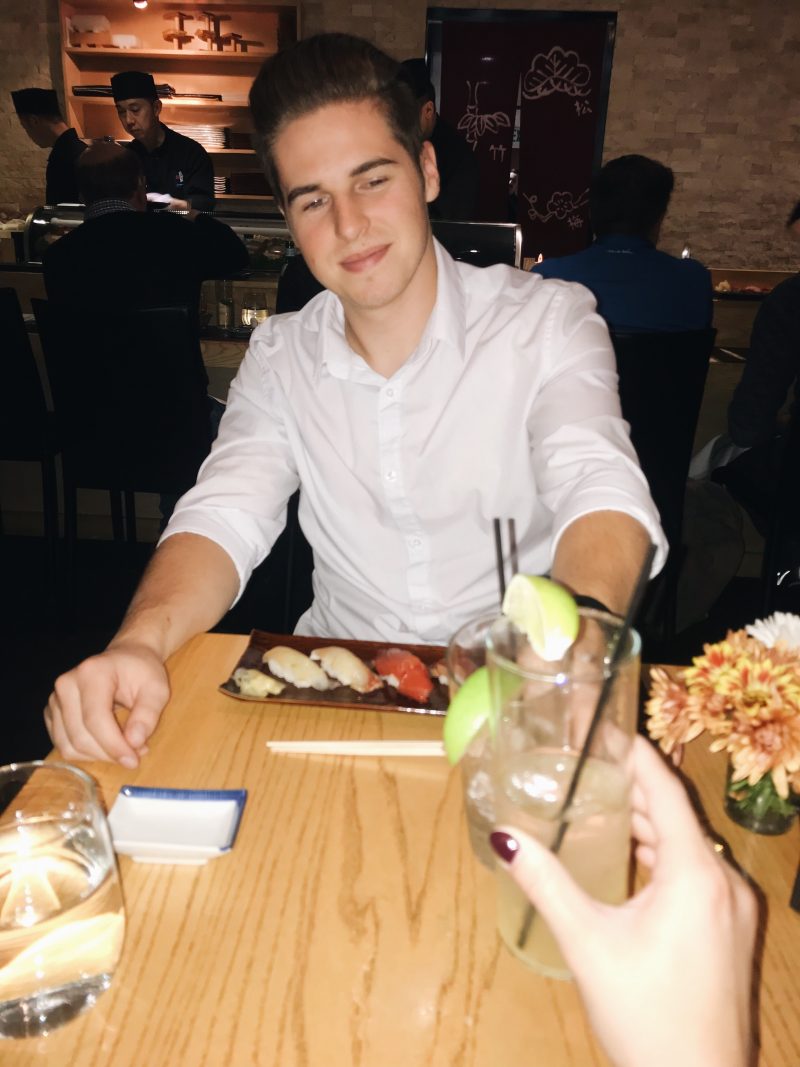 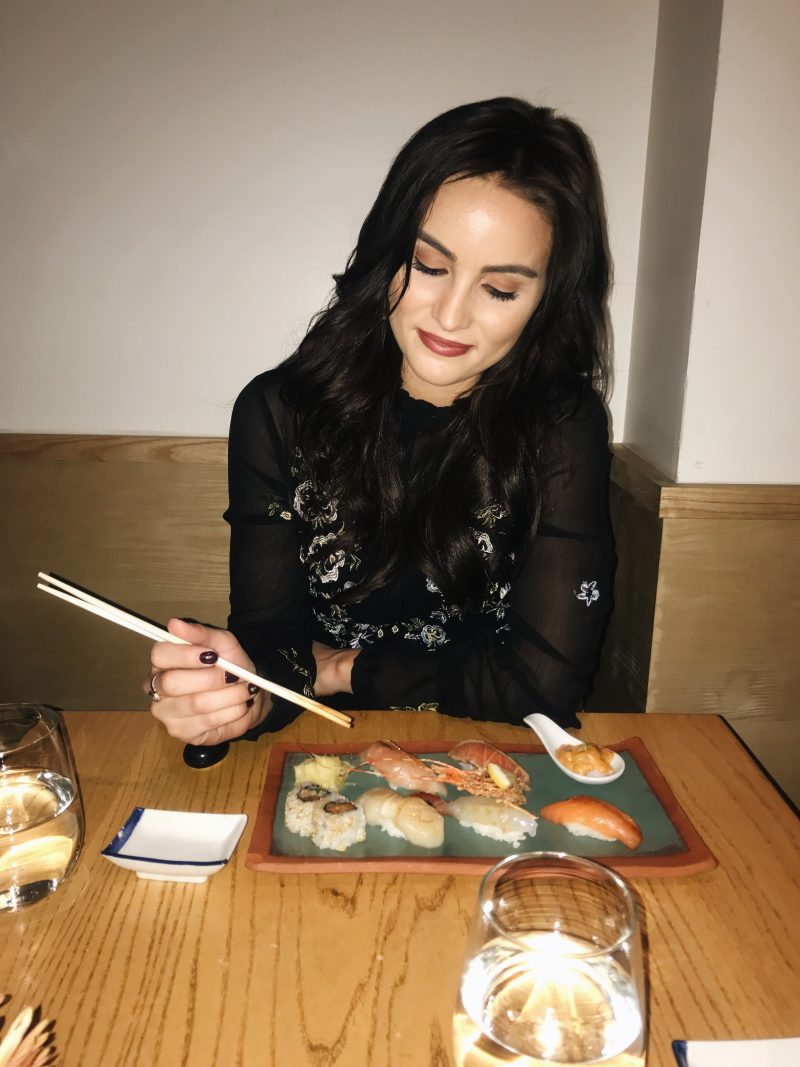 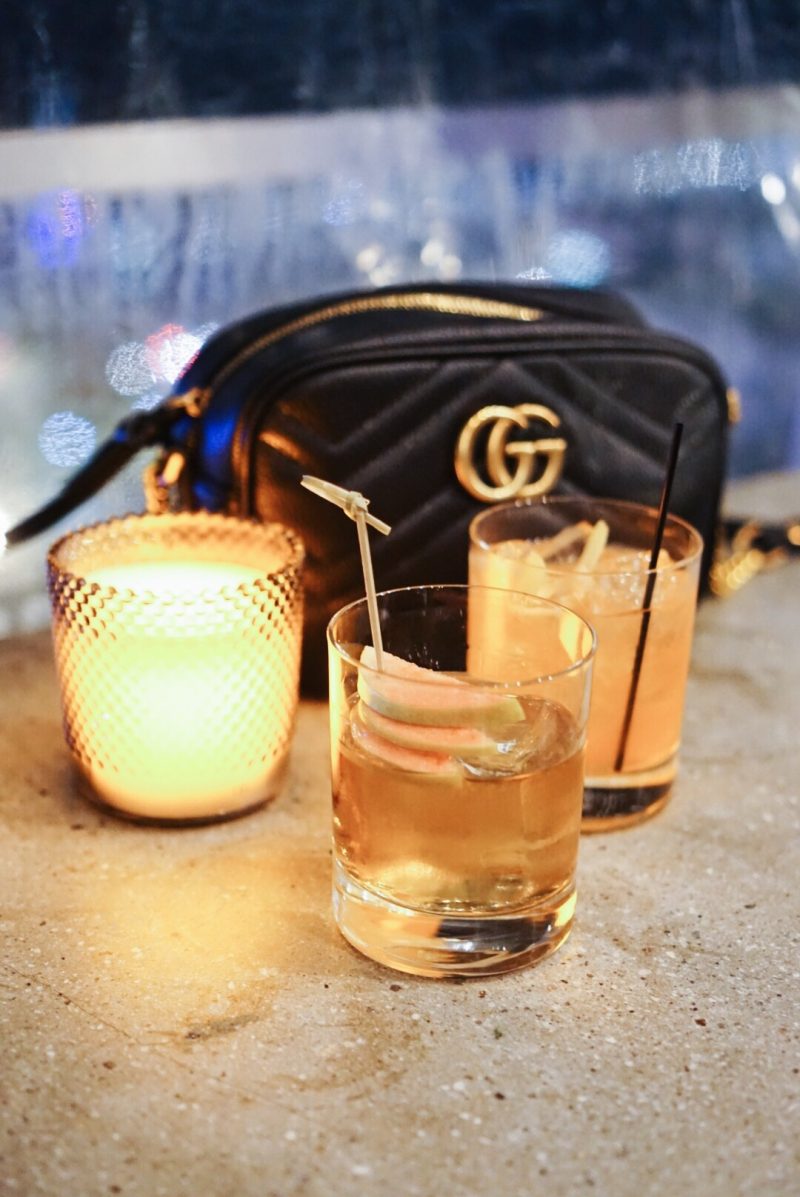 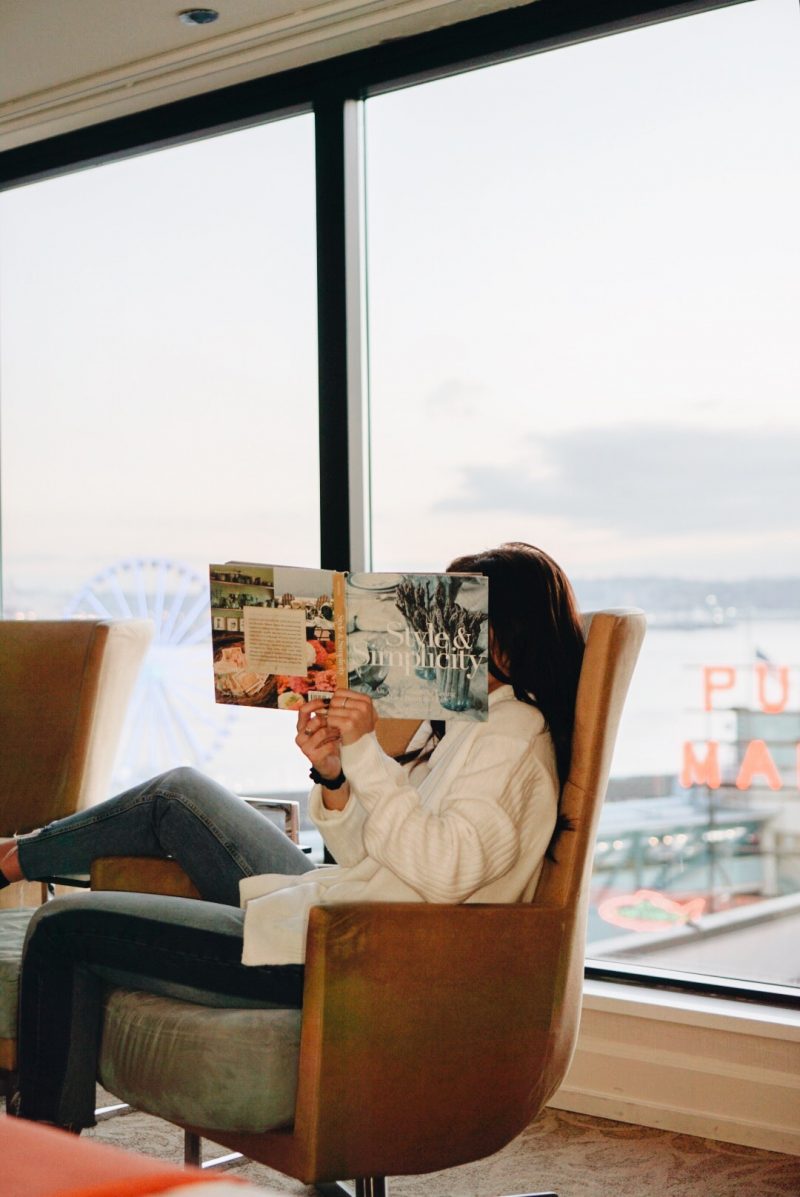 Since our anniversary fell on a Wednesday and we had already purchased Halsey tickets months before, I thought it would be perfect to make it a whole anniversary weekend. Friday we checked into the most gorgeous water view room at the Inn at the Market which sits right above Pike Place Market. Our room had sweeping views of the Sound and Pike Place, and since check in was at 4 we made it just in time for the sunset which that night happened to be so colorful and vibrant, we really lucked out! 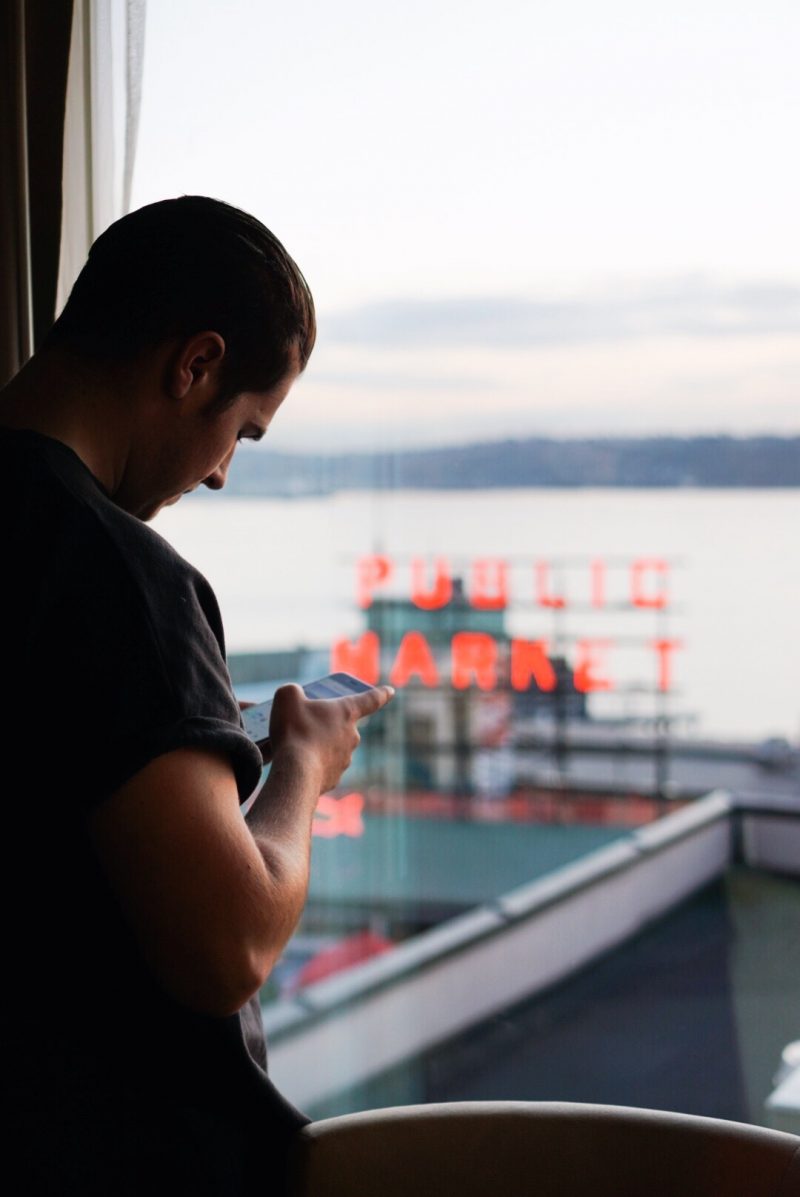 We have actually stayed at the Inn at the Market once before at their Beecher’s Loft suite with Keegan’s family which is an incredible loft space that is hard to describe accurately without seeing images, so you can take a look at it here. No matter the room though, you can never be disappointed with the gorgeous hotel that is literally hovering above the market. Before our concert we walked over to the Elysian Bar and had a couple drinks and a few light bites and headed to the concert afterwards which was a quick uber ride to the Key Area. 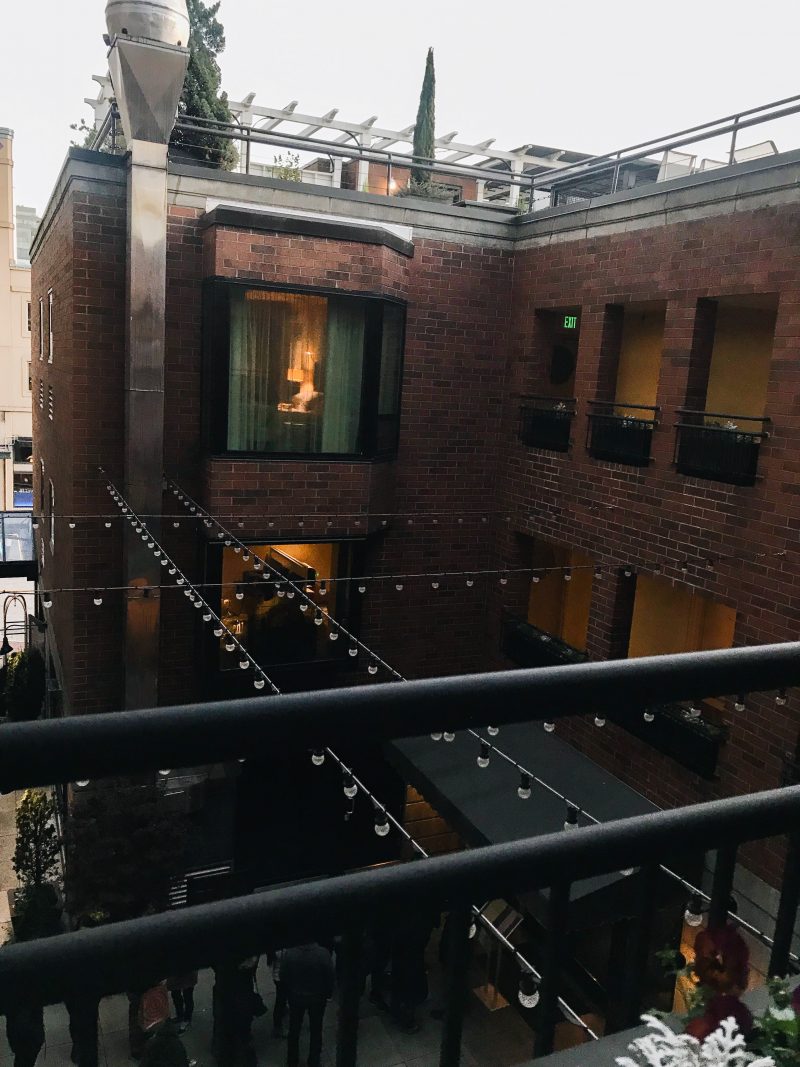 *If you don’t happen to have a concert planned for your own anniversary weekend there are so many cool shows and restaurants that would be just as fun. I would suggest The Pink Door, Triple Door, Moore Theater, and maybe even check out some smaller concerts at the Showbox.

La Panier, The Woodmark Hotel, Spa, and Dinner at Bin 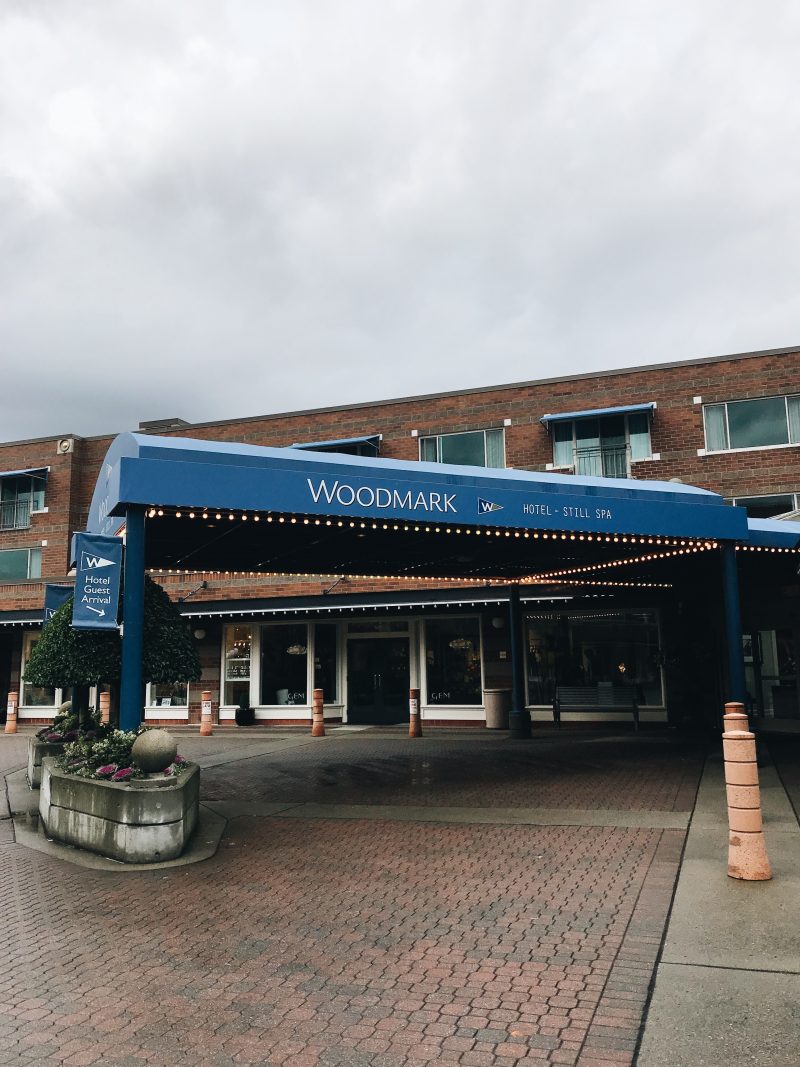 On Saturday we woke up at the Inn at the Market overlooking the market itself and we couldn’t help but make our way down to the hussle and bussle and get in line for La Panier, the bakery that you might have seen with the line out the door. So delish! After checking out of the Inn we drove over to Carillon Point in Kirkland where we checked into The Woodmark Hotel. The Woodmark hotel is such a special place to me as my parents actually got married there. The hotel is right on Lake Washington on it’s own little private campus and it is known to be one of the best luxury boutique hotel’s in the West and they were named number 1 wedding venue from 425 Magazine, which maybe one day….. 😉

Our room was beyond incredible, we actually were upgraded to one of their Lake Washington suites which included a bedroom, living room, coffee nook, deck with a view of the water, and bathroom. To say there was enough room for the two of us would be an understatement. We kicked off our stay with in room massages which was just what I needed. I highly suggest a spa service during your stay, you can either go to the Still Spa in the hotel itself, or you can have them come to you without ever having to leave your room. Tempting, right?? 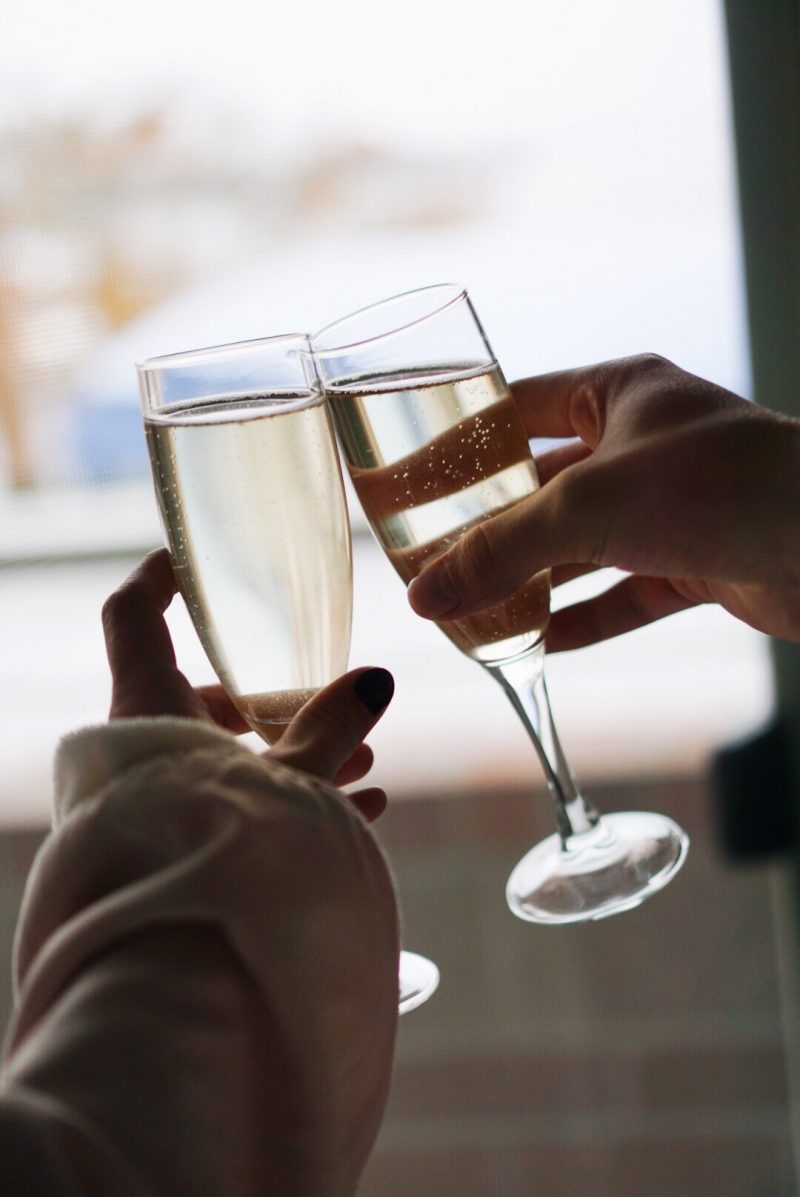 For lunch we made our way over to Carillon Kitchen which offers “make your own” pizzas, salads, and grain bowls-so yummy! It is the perfect stop for a little lunch or breakfast in the morning. 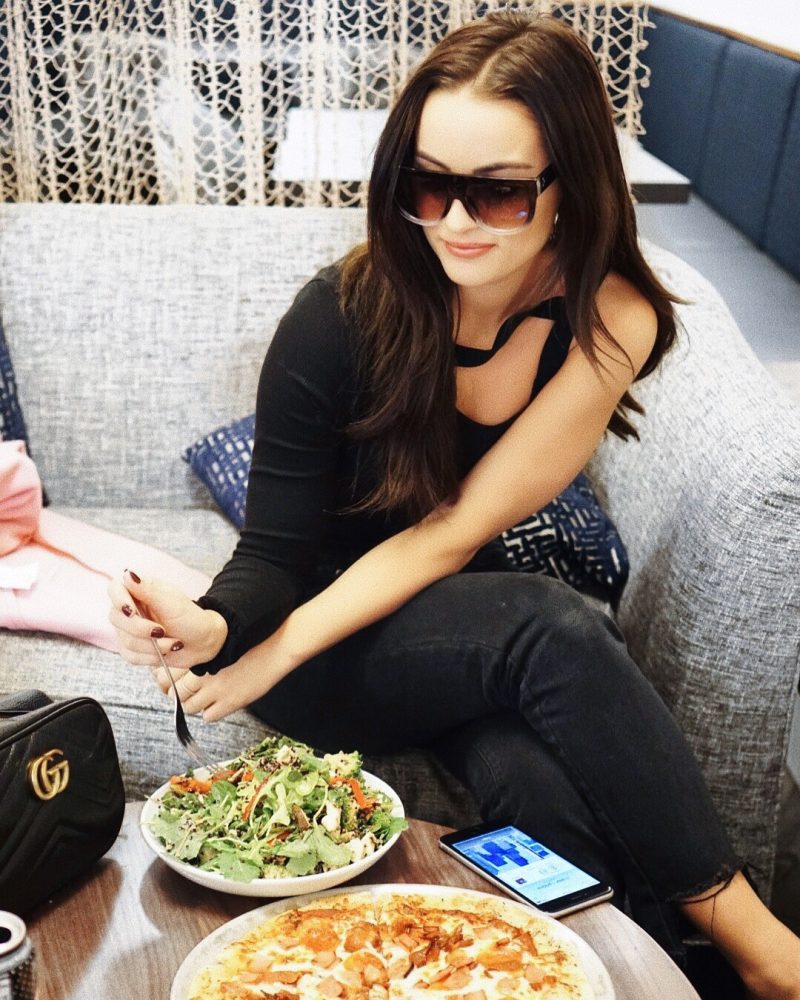 The rest of the day until dinner we honestly just rested because sleep recently has been a luxury. For dinner we went to the Woodmark’s restaurant and wine bar, Bin on the Lake. We got a table with sweeping views of the Lake and enjoyed appetizers, wine, and dinner and it was the perfect evening. We started out with the mussels and burrata (of course, if burrata is on the menu I always have to get it), and I got the duo for dinner which is their filet and citrus poached lobster and Keegan had the Salmon. One of our favorite things about the restaurant is that they offer wines by the half glass so you can have a small pairing with each course and can try out a variety of their selection which is quite vast. Even if you aren’t staying at the Woodmark, definitly check out Bin on the Lake for a date night or dinner one evening, the atmosphere is stylish and relaxed and all of their food is locally sourced and they incorporate so many unique flavors into their dishes it’s a must try! 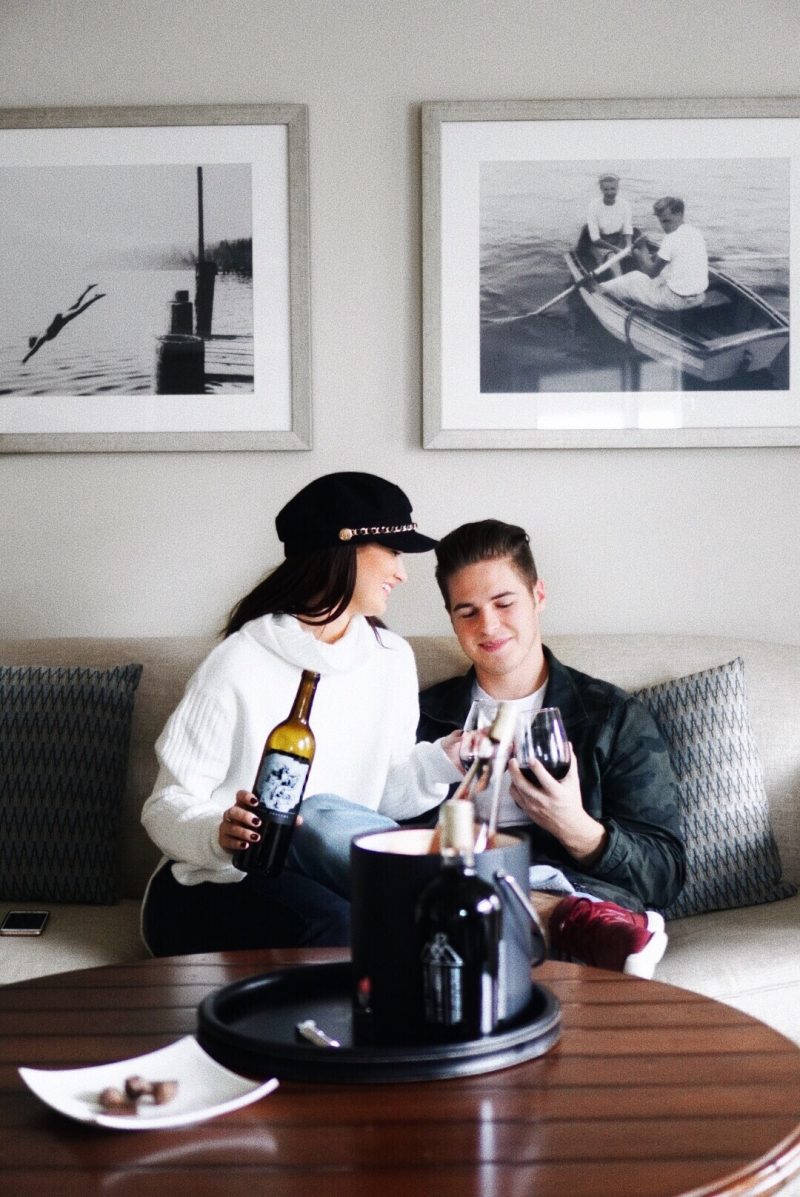 I truly can’t tell you how great the service was at the Woodmark. I want to suggest them to everyone just because of how well they treated Keegan and I. It was the little things that really made them stand out. From giving us a phone charger because we forgot ours, to the champagne and chocolates they gave us after our massage, to the bottle of wine and cheese plate they left in our room, all of the small details that they work hard to include truly made such a difference in our stay. If you ever get the opportunity to even just check it out when in Kirkland, I couldn’t recommend it more. If you happen to be looking for a wedding venue as well, this might just be your place!

Keegan and I had the best and most relaxing anniversary weekend and I can’t express how lucky I am to have found such an amazing person that compliments my personality and truly makes me a better person each and every single day. Thank you so much for taking the time to read all about it and get to know us a little better. Until next time, xx. 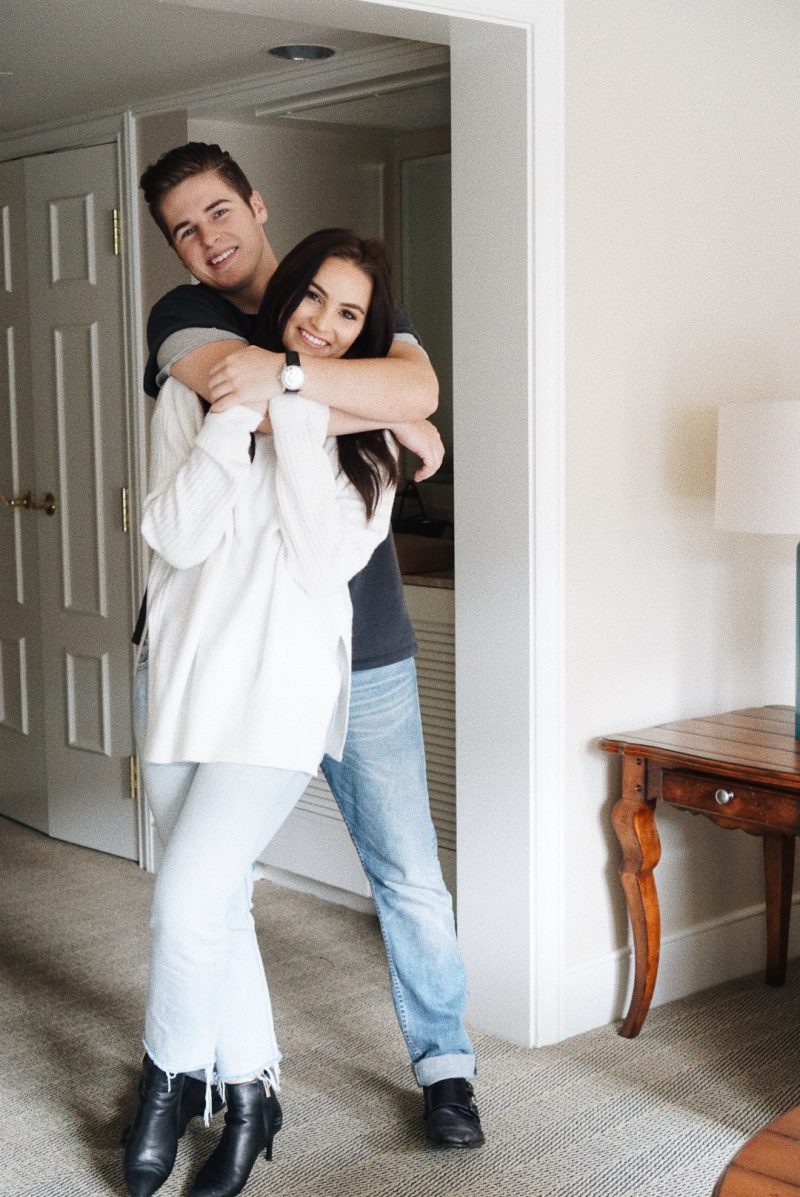